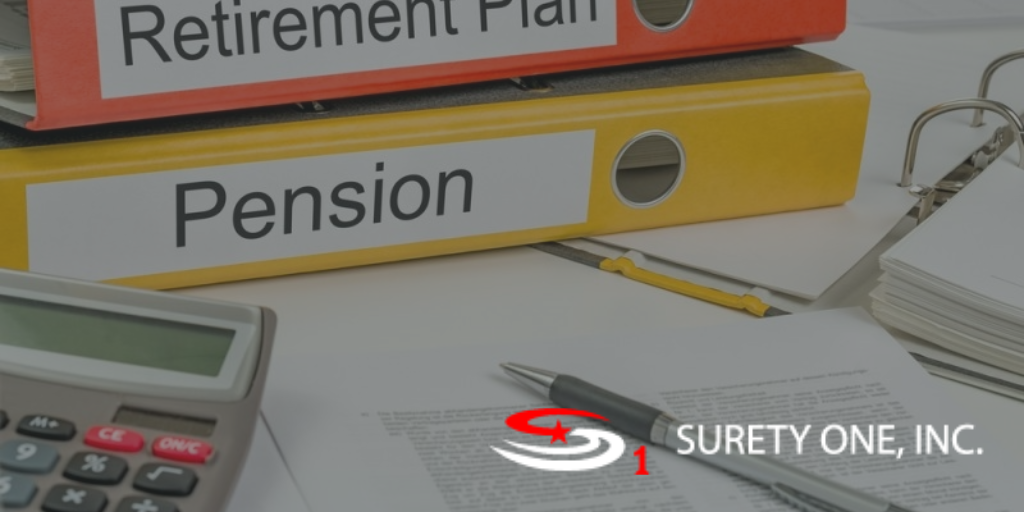 As we begin the new year, many enterprises are establishing or reviewing their pension, 401(K) and defined benefit plans. Surety One, Inc. would like to remind you that U.S. Codes, ERISA section 412 and related regulations (29 C.F.R. § 2550.412-1 and 29 C.F.R. Part 2580) require that fiduciaries of employee benefit plans and every person who handles funds or other property of such plan, be covered by appropriate ERISA fidelity bonds. ERISA’s fidelity bonding requirements are intended to protect employee benefit plans from risk of loss due to fraud or dishonesty on the part of persons who ”handle” plan funds or other property of its beneficiaries. An ERISA bond must be equal to at least ten percent of the amount of funds he or she handles, subject to a minimum bond amount of $1,000 per plan with a maximum of $500,000. Plans that contain non-qualified assets such as property or mortgages, limited partnerships, valuable art, etc., must be covered by a fidelity bond that is equal to no less than 100% of the plan value. DON’T IGNORE THIS OBLIGATION. The Department of Labor monitors compliance with the ERISA fidelity bond requirement. The bond must also be reported on a specific report form. Plan sponsors and administrators are obligated to file a federal Form 5500 annually, which asks this very question. Civil AND criminal penalties are associated with failure to comply and have been prosecuted for failure to fulfill this very basic statutory requirement.

So what happens if your plan suffers a Department of Labor (EBSA) audit and you do not have the required ERISA fidelity bond? Where no plan loss have occurred the responsible fiduciary generally runs at least the risk that he/she will be assessed the “twenty percent fiduciary penalty” under ERISA Section 502(l). In the case where a fiduciary breach resulted in damages to the plan, the failure to have an ERISA bond is a federal code violation in and of itself. Failure to purchase an ERISA fidelity coverage, leaving the plan unprotected against an act of dishonesty or fiduciary breach by an individual who should have been bonded, may spread personal liability for those acts to a plan sponsor, member of management or other party serving in a fiduciary role even if that party had NO fault for the loss.

Bear in mind that this bond follows a particular format. A fiduciary liability policy is NOT sufficient to comply with the law. The Department of Labor has provided a specific directive and advice on this very matter in its Field Assistance Bulletin (No. 2008-04). The Director of Regulations stated that, “Fiduciary liability insurance generally insures the plan against losses caused by breaches of fiduciary responsibilities.” This is NOT sufficient. While the Code does ALLOW plans to purchase fiduciary coverage it is not obligatory and cannot take the place of proper ERISA fidelity bonds.

The nation’s surety leader, Surety One, Inc., is a specialist in surety and fidelity bond underwriting. We are one of the largest producers of ERISA bonds in the nation. Our knowledge, extensive experience with these instruments and our broad fidelity underwriting authorities allow us to fulfill your fidelity bond need immediately.

We offer the following coverages as well as plans that consist of some blend of the same:

ALL of these fidelity bonds can be written on primary basis to $5 million and excess layering above the $5 million standard limit. Surety One, Inc. is a bond underwriter licensed in all fifty states, Puerto Rico and U.S. Virgin Islands. All of our surety companies appear on the U.S. Treasury’s list (T-List) of carriers acceptable for federal obligations. Bonds are issued withing one hour and retro-dating is available. Visit us at http://www.ERISA-Bonds.com, call (800) 373-2804, or emailUnderwriting@SuretyOne.com for application materials or further information.