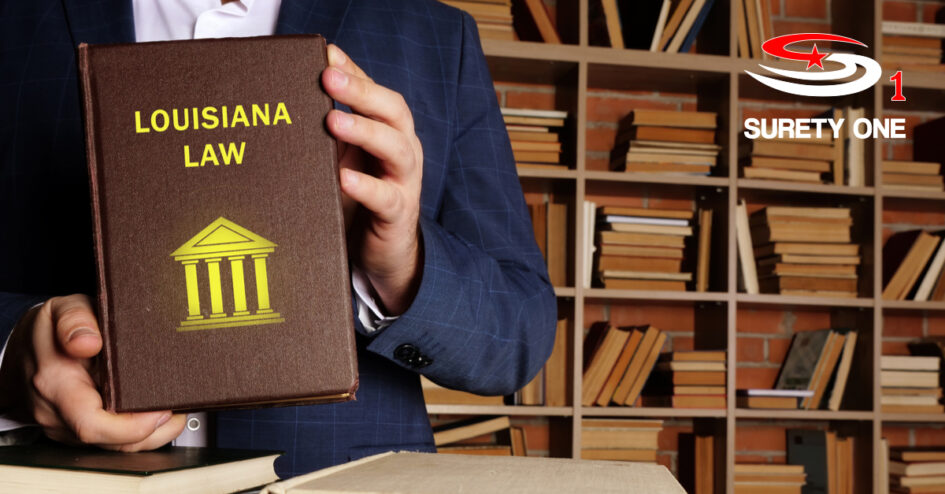 A Louisiana injunction bond or temporary restraining order bond is required more often than not under Louisiana Code, which unlike other states relies heavily on a Justinian-style of jurisprudence. The imposition of an injunction bond requirement is wholly discretionary however the state, ” . . . has one of the strongest bond requirements. It provides that an injunction “shall not issue unless the applicant furnishes security in the amount fixed by the court, except where security is dispensed with by the law. The surety bond requirement is mandatory, though the amount of the required bond is discretionary.” (Marotta, 1988).

The regulating statute is CCP 3601 which states, “An injunction shall be issued in cases where irreparable injury, loss, or damage may otherwise result to the applicant, or in other cases specifically provided by law. No temporary injunction against the commissioner, or the department of conservation, or its agents, employees, or representatives, or the attorney general, shall become effective until the plaintiff shall execute a Louisiana injunction bond in an amount and upon such conditions as the court directs.” Application for injunction or temporary restraint must be made formally by petition. “Injunctions are designed as provisional remedies, primarily used to preserve the status quo of litigation pending trial. They do not involve an adjudication of the ultimate rights of the parties but rather are designed to prevent future wrongs, not punish past acts.” (Marotta, 1988)

A Louisiana injunction bond must be issued by a surety licensed in the state. Quoting a temporary restraining order bond is accomplished by a surety bond underwriter with knowledge and experience manuscripting court bond obligations and with the operative Louisiana Code(s) that regulate their form and sufficiency. Judicial bond leader, Surety One, Inc. specializes in surety bonds for federal, state and local trial courts and courts of appeals. Application submissions are reviewed and responded to within one hour. We are the most agile court bond underwriter in the United States. Call (800) 373-2804 or email us at Underwriting@SuretyOne.com to discuss your Louisiana injunction bond or other litigation surety bond need.